Weekly 45 rpm’s for ya Friday afternoon. Serious collector action inside.

On Friday May 26th 2017, Southside Soul will celebrate its 5th Birthday. Help us keep the faith with DJ’s Ronan, Lady Soul, Mick & Gail Smith (The Soul Twins), Heata & special guest Vince Peach from PBS 106.7FM’s “Soul Time”. And finally, we welcome back the man Big Daddy Warbucks to the decks for an extra special appearance!

Posted in 45 FRIDAY, DIGGIN' FOR GOLD, The Royal Runners

Southside Soul fires up again tonight for yet another cracker instalment of Northern Soul & Funk music for all your dance floor needs.

This month features DJ Lady Soul, Heata HG of The Royal Runners & The Soul Twins digging deep into their 45 crates to bring you the soul we have come to love and dig. We will sorely miss our great friend DJ Big Daddy Warbucks who has moved interstate. I’m sure he will be back soon! So if anyone in the Canberra area is looking for a top notch Soul DJ he’s your man!

Doors from 8pm til late and only 5 clams to get in.

“Southside Soul” is kicking off once again tonight in Burn City. This month, local PBS legend Ronin (Hippopotamus Rex)and his mate Heata (The Royal Runners/Hired Goons) will be hitting the 1’s & 2’s for a night of heavy Funk 45’s and Northern Soul for y’all to get ya groove on to. Resident DJ’s Big Daddy Warbucks & DJ Lady Soul will as always be bringing the soul for ya ear to hear throughout the night too. Doors at 8pm & $5 entry. 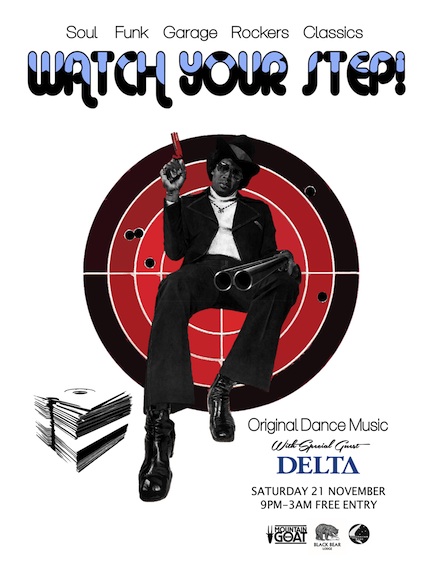 45 FRIDAY – Harmon Bethea – Talking About The Boss And I

45 FRIDAY – THE SOUL PRESIDENT “Got To Have It”

Few years back a new indie kid popped up on the scene called ‘Good Felons’. Now defunct and for good reason, they put out a bunch of 7’s and ep’s that only spanned from around  2010-2013 and featuring the likes of MOOD, Kev-E-Kev & AK-8 and a repress of J-Force’s 93 ‘Bullseye’, which I managed to get a test pressing of (one good thing that came out of all their fuck ups).

I feel pretty bad for much of the artists involved with this label, some of the which addressed the fans personally via the labels facebook offering personal copies signed.

As the saying goes…Put the music before the money!!!

Besides these cunts being fuck ups, sending out warped copies or none at all like a pack of low dogs and not to mention having about as much communication as a rapist to it’s victim, the above mentioned is pretty dope track. One thing I will critic on though is that it looses it’s intensity at the end with Marc switching up the delivery and flow. Almost sounds like he’s recorded the last verse on kane up in Malibu 4 years later.

Respect the Arch Druids back drop but I’m in favor of the J Force remix below. Sounds tougher with the vocal having some more room to breath around those SP-1200 stabs and strings on loop.