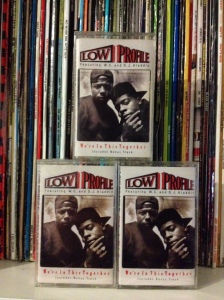 In 1990 my Dad took his mother to the USA. It was the first time she had ever been out of Australia. They travelled around L.A, San Francisco & Memphis seeing all the sites and generally enjoying time away from the farming life in Shepparton. My Dad also runs his own mobile disco, which he has done so since 1983. So it’s fair to say that he has played a major hand in my musical development since an early age. The disco mainly catered to the pop music of the time, but that is not to say that his tastes were limited by any stretch of the imagination. A massive fan of Australian Rock music, I learnt so much over the years and have been lucky enough to still have the majority of his vinyl collection. The reason for this backstory on my Dad is that it was him who introduced me to the world of Hip-Hop by bringing home a new release VHS rental of a then unknown film from New York entitled “Beat Street” in 1984. I remember him saying to me “I reckon you might like this. It’s a new film about music in New York.” And the rest is history……

Fast forward 6 years later and Dad brings another amazing game changer to the table. “I’m taking Granny over to The States for a few weeks on a holiday to get her away from the farm for a bit. Make a list of some albums you want me to get for you”. You fuckin’ serious! I went straight to my Source Magazines and trowled through the album charts & ads and began penning anything I could see in the mag. 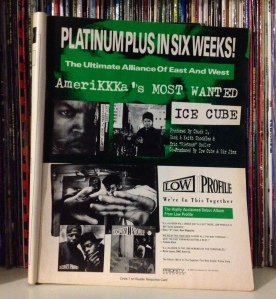 So the list was made and Dad & Granny left for The States. Everyday he was away I couldn’t help but think what was going to come back with them in their suitcases. Time passed and they returned. First question I asked was the obvious, “have a good trip?”. Yes, I’m a good son. Hahah. We picked them up with my Mum at Melbourne Airport and then drove 2 1/2 hours back to Shepparton. This almost killed me. Curiosity outta control.

Once settled back in at home, he reached in to a suitcase and pulled out a couple of yellow Tower Records bags. My God..are you for real! I won’t go into everything that was in there, but the powerhouse selection was this group I’d seen in the Source called Low Profile. This is that album and that is the magazine I still have to this day. A 1989 release not yet in Australia to my understanding, but if it was, it was certainly not within my reach. Central Station Records may have had it at some point but I never saw it there.

What he brought back was a sealed Longbox and cassette. Bang! Straight into the boomy and off I went. I couldn’t believe what I was hearing. This is why this album is so special to me.

Low Profile consists of DJ Aladdin & rapper W.C. A two man team outta L.A. The tape & CD contain 11 tracks and the vinyl 10. “No Mercy” is the bonus cut. Dope to say the least. This album is pure Hip-Hop from start to finish. Amongst many, it contains the seminal DJ cut “Aladdin’s On A Rampage”. An incredible display of techniques (and no bloody Serato) on the 1’s & 2’s, with W.C destroying the rhyme bigging up his DJ cut by cut. He sounds proud as he tells us how dope Aladdin is while cuts fly left, right and centre over scaled booming 808’s and next level samples. Too powerful.  Flawless in my opinion. The ultimate Hip Hop album…precise cuts, tight as fuck raps and bangin’ production on a heavy funk tip. Essential.

Low Profile first appeared to the masses on Ice-T’s Rhyme Syndicate compilation “Rhyme Syndicate Comin’ Through” in 1988 with the track “Think You Can Hang?”. This cut can only be found on the compilation to my knowledge. There is also a 12″ called “Hip Hop I Crave” released in 1987 by Low Profile that also appears on a 2010 CD-R release called “DJ Aladdin Presents Low Profile’s Greatest Hits”.

Years later I discovered there was a promo tape released. The tape is a DJ mix of the songs from “We’re In This Together” from the man himself. Side A and B are the same and believe me, it’s worth chasing down. It’s tight as fuck and took me years to find. 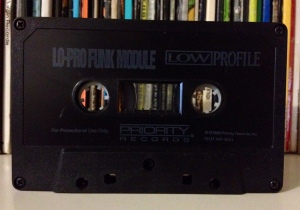 The only downfall of this release was that it was to be Low Profile’s only album. Aladdin went on to work with Ice-T with his Ammo Dump steez as well as many solo/side projects and W.C went on to form W.C & Tha Maad Circle. But I am thankful they continued and their future projects were outstanding as well. When it’s in the blood, the funk will flow.

I had the privilege of meeting W.C at an Ice Cube gig backstage a few years ago in Melbourne and he was a true legend. I’m not one for meeting artists I respect and listen to, as it can generally tarnish your opinion of them, and really, what would a guy like W.C really care about what I have to say. That’s just how it is. But we got talking about this album and I mentioned I still had the OG Longbox and he flipped out. He actually seemed genuinely surprised and interested I knew the LP and knew what Longboxes were. I left it at that and thanked him for the music and started to leave. He stood up and walked forward to me and shook my hand with mutual respect. What a King!

Finally, check the 12″ of “Pay Ya Dues” the second single from the album. The B-Side contains an unreleased tracks entitled “The Dub B.U. Just Begun (Bonus Beats)”. The track is mad uptempo with furious cuts and W.C turning up the heat over a raw drum break and neck snapping bassline. Simple yet so hype!

So in conclusion, I highly suggest that any fan of dope Hip-Hop add this to the top of their ‘want’ list. A brilliant album and one that holds many memories.

Posted on August 19, 2014, in YOUR LIFE ON TAPE and tagged dj aladdin, low profile, pay ya dues, w.c. dub c, we're in this together. Bookmark the permalink. 3 Comments.