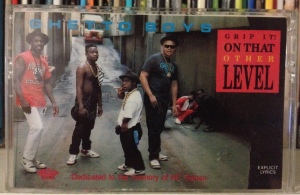 This is the classic Rap-A-Lot Records release from 1989, which will forever remain a defining moment in the labels seminal history. The picture above from my collection is the original release that would later be re-released with the revised name for the group – “The Geto Boys”. Although this is album number 2 from the Houston, TX crew, it is not the original line up.

“Grip It!” consists of 12 solid, raw and uncompromising tracks of pure Texas funk & tough Roland drum machines smashed thru ya speakers with uncut dope such as “Gangster Of Love”, “Scarface”, “Mind Of A Lunatic” & “Size Ain’t Shit”. This version contains the original “Gangster Of Love” track that sampled “The Joker” by The Steve Miller Band. A later version using “Sweet Home Alabama” by Lynyrd Skynyrd would be used for a re-release of the 1990 album below. However, the “The Joker” OG version does appear on the original press of “The Geto Boys” 1990 release. It was the re-release of that which switched up the tracks and contained the “Sweet Home Alabama” version. Confused? Many are but that’s the deal. I have ’em all. On CD, “Grip It!” has up to 4 or 5 re-presses. All different in artwork, track listing and labels/distro to some extent. It was Rick Rubin who chose to remix the track, yet some say there were sample right issues with “The Joker”. This is very much true. The original was released without sample clearance at a time when this wasn’t really a big deal or a concern for many Hip-Hop artists. Later that year it certainly became one for many artists. Steve Miller never gave the sample clearance, but it had already been released. Next stop…remix the song with a new sample…enter Rick Rubin & Def American.

“Grip It!” a year or so after it’s release would be re-incarnated as “THE GETO BOYS – The Geto Boys”. Essentially, this album is a collection of the song “Assassins” from the “Making Trouble” 1988 album, 8 tracks from the “Grip It!” 1989 album and 2 new tracks. “The Geto Boys” is basically a remake of the “Grip It!” album. Rick Rubin re-vamped and re-amped the existing tracks and along with some new and changed lyrics, helped create a massive album that many regard as The Geto Boys masterpiece.  I’ll attack this album in a future post. So much to say on this, but let’s get back to “Grip It!” for the moment….. 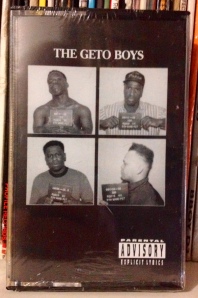 Man, the first time I heard “Grip It!” in ’89 shit changed for me. I had heard Willie Dee’s “Controversy” that same year and was familiar with the 1st GB tape “Making Trouble” from ‘88, but this was something else. J. Prince had done it. He had created an unstoppable monster, a monster that boasted the power of uncompromising MC’s over top notch “in house” production that represented the hard hitting sound of the underground, yet was unlike any other area’s style at the time. The mood and samples were unlike anything I was hearing coming outta the West or East of America or even the Midwest. King Kurtis’ “Memphis Soul Stew” flipped to perfection and fattened up for the killing? Are you serious? Unbelievable!!

Heavy southern funk, blues and rock were just some of the styles being smashed together by producers Ready Red, Doug King, Bido 1, J. Smith and Prince Johnny C to create a soundtrack to the MC’s stories of the street life in the H, TX. I can go on and on about the history of this crew (and one day probably will), but hearing this at the age of 15, my life in Hip-Hop had changed. 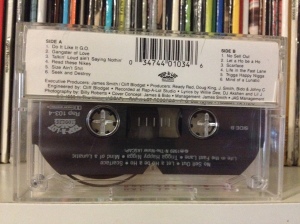 I had been listening to Hip-Hop since the age of 10 (1984), and like many my age, those that know will rate this album as one the greatest from the 80’s and beyond. Run DMC, Cold Crush, Schoolly D, Just-Ice, Ice-T, N.W.A., Ultra Mag, EPMD, P.E. …the list goes on…were heavy in my Walkman at the time, but this group, with this album, really affected me in a way unlike any other before it. A real eye opener, from rappers that you truly believed every word they said, and stories in music I had never experienced before as opposed to these “studio gangstas” or “reality rappers” of yesteryear and today. The Ghetto Boys were one of the first to lay tha G-Code down and the music had never sounded better in my humble opinion. Pre synthed-out plug-ins and internet, the R-A-L Family’s crates were deep & heavy! From what I have read over the years, not so much as extensive in quantities at the time, more extensive in knowledge and the true meaning of funk.

I began to source out as much Texas rap as I could after this, trying to get my hands on anything with the Rap-A-Lot Records logo on it. And when I did, shit just got bigger and better. Growing up in Shepparton, VIC, I felt like I was the only person in the world who knew who the Ghetto Boys were, and this was kinda special. It was like I had discovered them from obscurity and brought them to the masses in my hometown. I felt like J. Smith putting the group together, by passing the GB tapes from friend to friend. An indirect label rep of sorts in my area. Many fell off, and very few stayed, but I am glad this memory has followed me throughout my life and ultimately led to amazing follow up albums from the group that have constantly inspired and entertained me for many years. My only burning question about the group is ”why haven’t they toured Australia yet?” and I won’t take passport issues as a valid answer/excuse. GB & Rap-A-Lot Records fo Life!